I will be posting Christmas themed horror films over the next 24 days of LosMas; for the thirteenth night, I am listing the 2017 holiday mystery The Yearly Harvest. 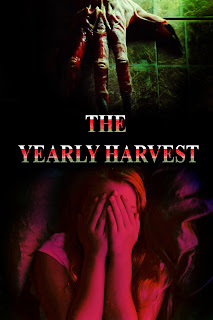 A young reporter travels to a small midwest town of Selah in the hopes of researching the origins of some common Christmas traditions. She meets a private investigator searching for lost children, and both learn that a dark secret resides in the seemingly perfect little town that celebrates Christmas in its own way. The Yearly Harvest is based on a novel written by Ryan Callaway, who also directed this screen adaptation. The film is more mystery than horror, so don't expect buckets of blood or too much violence. The movie is overly long and difficult to follow in places; the story itself is interesting, but too much time was wasted on unnecessary dialogue. As a result, many might turn this off after an hour of the slow burn narrative.