I will be posting Christmas themed horror films over the next 24 days of LosMas; for the twentieth night, I am listing the 2012 isolation thriller ATM. 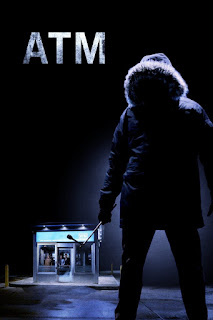 After an office Christmas party, a broker offers to drive a female coworker he likes named Emily home along with another coworker. Stopping at an ATM booth for some food money, the trio discovers a hooded figure wearing a parka and blocking their way out. Unsure of his intentions and without cellphones, the trio begins to get cold and soon learns the stranger has hostile motives. ATM is a 2012 thriller directed by David Brooks and starring Brian Geraghty, Alice Eve, and Josh Peck. The isolation-style thriller does not explain the reasons for why they were targeted, and nothing is learned of the hooded figure. In many ways, the film is a copycat of The Strangers without the creepy masks.