A remake that exceeded its parent 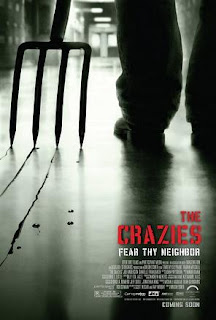 Dir- Breck Eisner
A small town sheriff (Timothy Olyphant )and his physician wife (Radha Mitchell )find themselves having to deal with an outbreak that is turning some of the locals into homicidal maniacs. Of course, when the Government shows up all will be well, or will it? This remake of the 1973 George Romero film had a much bigger budget and slicker look than the original. Unlike so many remakes, The Crazies improves on the story by using the zombie trope invented by George Romero and injecting elements of 28 Days Later into this derivative genre. Upping the violence, tension and adding some dark humor Director Breck Eisner took a relatively minor terror film from the seventies and reinvented it for the 21st Century. Unlike many in the audience, I had watched the original movie years back and was impressed by this production. I am usually not too fond of remakes, but this was a welcome change from the slew of knock off films and remakes that only seem interested in showing blood, gore and ignoring the spirit of the original production.
Posted by The Losman at 11:42 PM No comments: 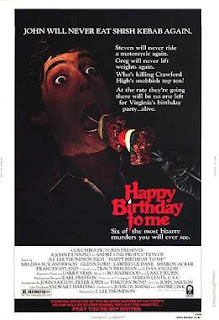 Is it all in her imagination or is Ginny (Melissa Sue Anderson) killing her friends off one at a time? In this VERY CONFUSING horror who-done-it, we get a very complicated plot involving a rainy night, a pissed off mother and a poor girl who was not invited to a party. A terrible accident occurs on that rainy evening, and the death of the mother is the only certain thing. It is years later, and Psychiatrist Dr. Faraday (Glenn Ford) is working with Ginny to help her sort out her terrible nightmares. Back in school, she is part of an elite group of students who are being killed offed with plenty of Red Herrings to make you go WTF. In a series of flashbacks, we get to see what happened yet even with all these clues; I still found myself rewinding the tape just to figure this mess out. The killings are pretty gruesome and in some cases entirely original, but the overall feel of the film is confusing and too much of a mess to figure out. Anderson and Ford must have had been told something we weren’t, like what the hell is going on!
Posted by The Losman at 1:03 AM No comments: