It's like Groundhog's Day but the mean girl gets whacked 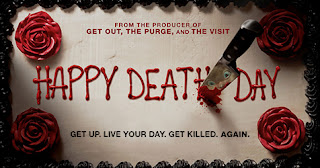 A college student named Tree wakes on her birthday after a wild night partying, and through the course of her day, she shows herself to be a massive bitch who shows little concern for those around her. As the evening commences, she finds herself face to face with a masked figure who murders her. She awakens immediately after and notices that she is reliving the same day with the same fate awaiting her. Many people are comparing this film to Groundhog's Day, and they are correct in some respects. It is a film that utilizes a loop to show the protagonist having to repeat the same day while she tries to determine the identity of her assailant. Happy Death Day does differ from Groundhog's Day in that Tree does alter her routine significantly as she tries to deduce who may be stalking her. In this respect, the movie is more similar to The Edge of Tomorrow in that each life she relives takes her one more step closer to finding the identity of the murderer. Happy Death Day does inject dark humor into the series of events as Tree learns to become a better person even if she still gets murdered. The level of violence is not as bad as many other slasher films resulting in a teen-friendly PG-13 rating. Overall this is a pretty original take on the slasher genre, with praise for Jennifer Rothe as the main character.
Posted by The Losman at 11:55 PM No comments: