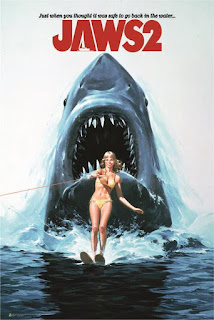 Jaws 2 (1978)
Dir- Jeannot Szwarc
"Just when you thought it was safe to go back into the water."
Things are going great for Amity Island as tourism is picking up, yet Officer Brody soon discovers that another shark is lurking the depths after a series of accidents occur. This time it's his two sons and their friends who are being stalked by ole Bruce the Shark, and with its nasty overbite, some of the teens are going to wish they stayed ashore. Sequels are often not as good as the source film, and with few exceptions, this film is pretty much the case. Jaws 2 is not the classic horror film that the first one is and has a slightly less dark feel to it. Still, the movie is entertaining, and when you compare it with the follow-up films, it is a decent movie 40 years after its release. Not as commercially or critically acclaimed as the 1975 classic, Jaws 2 still rates as an above-average sequel and is worth checking out if you avoid the other two movies.
Posted by The Losman at 3:19 PM No comments:

Email ThisBlogThis!Share to TwitterShare to FacebookShare to Pinterest
Labels: Jaws 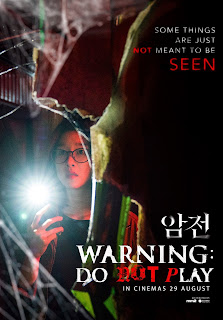 Warning: Do Not Play (2019)
Dir- Kim Jin-won
A young filmmaker struggling to make a horror movie is drawn to a legend of a student film that was banned after some people died when it premiered. The search for this movie and the obsession of the young director is the focus of the film Warning: Do Not Play. Directed by Kim Jin-won and starring Seo Ye-ji as Mi-Jung, Warning: Do Not Play is more mystery than horror but does borrow elements of popular Asian horror films such as Ringu and Lights Out. The movie appears to be told in a usual fashion. A series of flashbacks reveal that the story we see might be more than just a simple mystery as Mi-Jung discovers that her quest for the horror movie may be more hazardous mentally than physically. Director Jin-won's previous film The Butcher was a brutal found footage film, yet this film is less gory and a more traditional ghost story. The movie does have a great opening that sets up the events but loses steam until the end, which may confuse some viewers. With so many outstanding Korean horror films released in recent years, it is disappointing that Warning: Do Not Play does not have the impact of a movie such as Train to Busan or I Saw the Devil. It instead follows in the path of Japanese horror films with its ghost centered story. It certainly is a decent film in its own right, but it will not stand out too much compared to its contemporaries.
Posted by The Losman at 11:28 PM No comments: 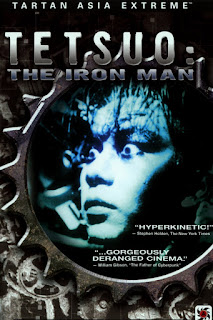 Tetsuo: The Iron Man (1989)
Ever wonder what would happen if you shoved a piece of wrought iron into your leg. Ever wonder what would occur if you suddenly developed a metal fetish. Using some techniques that seem more suited for a rock video, Tetsuo starts and finishes as if the director was on speed, and maybe something stronger. The film starts with a shocking scene of a man who cuts open his leg and inserts a metal shaft into the skin. The pain notwithstanding, he then runs into the street and gets hit by a passing motorist. The man in the car then suddenly develops a strange personal affliction, while he is shaving a piece of metal sticks out of him. He then finds himself being stalked by an unknown woman who is not entirely human. Even though the movie is about an hour-long, Tetsuo has the pacing of a much longer film. The rapid sequences and nightmare-like imagery create an atmosphere that rivals something by David Lynch.
Posted by The Losman at 11:18 AM No comments: