I will be posting Christmas themed horror films over the next 24 days of LosMas; for the eighth night, I am listing the 1989 slasher Silent Night, Deadly Night 3. 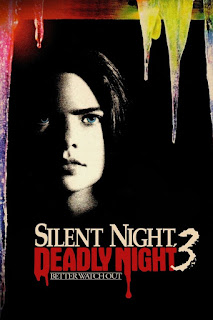 After the events of Silent Night 2, young Ricky is now in a coma, and after six years, he still lies there with a Plexiglas dome over his brain. A mad doctor uses a blind psychic girl to attempt contact, and this only ends up waking him so he can unleash more death on her family. The movie was the last to follow the two Caldwell brothers' storyline and had only a few kills compared to the first two movies. Actress Samantha Scully, the main character, portrayed Laura well, but her role was wasted by having her mimic the blind characters' role in Wait Until Dark. Robert Culp appears as a determined police detective, and Bill Moseley portrays Ricky with little to no dialogue.