I will be posting Christmas themed horror films over the next 24 days of LosMas; for the eighteenth night, I am listing the 2008 thriller The Children. 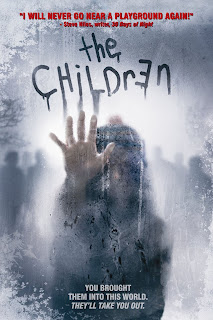 Holiday horror movies with crazed killers often have a lunatic dressed in a costume, making families suffer for spending time together. In a break from this routine English director, Tom Shankland's 2008 film "The Children" truly stands out by making the most innocent among us, the killers. An extended family gathers in a remote home to share the holidays with the kids. All seems fair until, one by one, each of the young kids begins to mysteriously turn on the adults and leaving some bloody bodies along the way. Sharing the same name as the 1980 killer kid movie by Max Kalmanowicz, "The Children" is unrelated except for the innocent looking murderous kids. Skillfully directed, "The Children" seems more violent than it is and the excellent cast of child actors makes the viewer genuinely fear what will happen next. The winter setting makes a perfect backdrop as the blood-stained snow makes the film even more visually creepy. "The Children" is a terrifying and disturbing film from the UK; we have not seen kids this scary since Bloody Birthday.