Movies that are Disguised Remakes 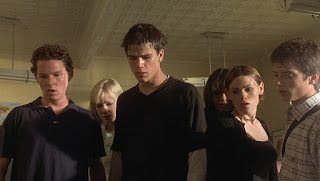 The Faculty (Invasion of the Body Snatchers)

The 1998 Robert Rodriguez directed Sci-Fi Horror movie has a group of high school students with little in common working together after they notice odd behavior from the staff at their high school. The Faculty was a modest success with younger fans who may not have realized that the plot of the movie borrows from several sci-fi films. Screenwriter Kevin Williamson's script mixes Invasion of the Body Snatchers, The Stepford Wives and even a bit of the Breakfast Club in a movie that works as a great homage to the sci-fi thrillers of the 1950's Cold War Era. 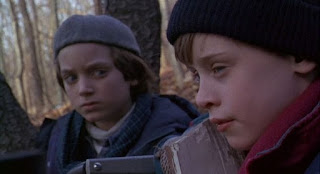 The Good Son (The Bad Seed)

Macaulay Culkin plays Henry Evans who displays a morbid fascination with death and soon has his cousin Mark worried he might hurt him and Henry's sister. When The Good Son was released in 1993, there was much discussion on the role that Culkin played as a psychologically disturbed child that differed from his role as Kevin McCallister in Home Alone. The reality is that The Good Soon is a vehicle for newcomer Elijah Wood playing Mark Evans who is sent to stay with relatives after the death of his mother. The plot of The Good Son seems to borrow elements 1956 thriller The Bad Seed, in both films you have a seemingly sweet child displaying psychotic tendencies and hurting those around them despite having parents who are unwilling to admit they have a troubled child. 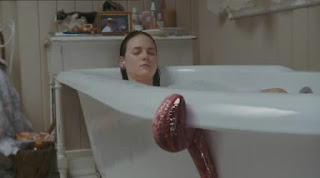 Slither (Night of the Creeps)

A meteorite lands in a small town releasing a swarm of slug-like creatures that turn the citizens into zombies who are at the mercy of an infected master. When James Gunn's 2006 movie Slither was released, many people pointed out the preview trailer looked like a direct ripoff of Fred Dekker's 1986 cult classic Night of the Creeps. To be fair Slither is a fun black comedy that was influenced by David Cronenberg's Shivers and The Brood as well as 80's horror films. Although Slither was a box office failure, it has become a cult favorite with its excellent cast and would help Gunn pave the way for his successful Marvel movies a decade later. 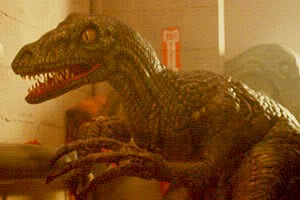 A team is flown into a secret facility and discover that dangerous creatures are loose in the facility and they are left trapped after their escape vehicle crashes. The plot of Carnosaur 2 not only seems derivative it is a complete and total ripoff of the 1986 action sci-fi film Aliens. Carsasuar 2 even has a sequence with the hero fighting a dinosaur with a forklift. 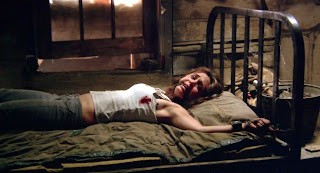 Wrong Turn (The Hills Have Eyes)

A group of college students is stranded in the deep woods and encounter a family of inbred cannibals who kidnap them and intend to make a meal out of them. In many ways, "Wrong Turn" is essentially The Hills Have Eyes just set in the mountains of West Virginia instead of Nevada with a bit of The Texas Chainsaw Massacre thrown in because why not. The Wrong Turn franchise has been followed by two sequels and three prequels with a rumored remake in the works. 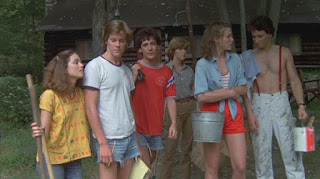 Friday the 13th (Bay of Blood)

Summer Camp slashers were a staple in the 1980s, and it was no surprise that Friday the 13th was regarded as one of the most popular despite it being already derivative of Halloween and Black Christmas. Almost ten full years before Sean Cunnigham's slasher classic,  Mario Bava's Bay of Blood was released and criticized for the violence and gore that would become commonplace in the 1980s. Bay of Blood was one of the first slasher movies and inspired dozens of films including Friday the 13th, The Burning and Madman. 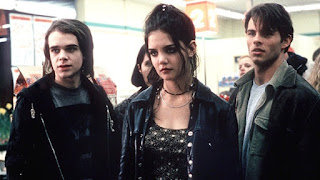 X Files Producer David Nutter directed this sci-fi thriller that has a group of rebellious teenagers seeing their outcast friends suddenly conforming to the Blue Ribbon group who are clean cut model students. Disturbing Behavior is pretty much a revamped version of the 1975 thriller The Stepford Wives with teenagers being the focus and as a result of the film does not have that much of an impact the Stepford Wives had when it was released. The cast is made up of popular young actors, but the script was too derivative to be anything more than a pale imitator of the vastly superior Stepford Wives. 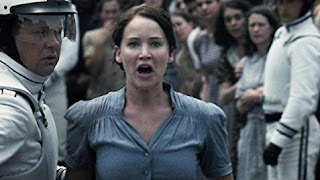 Suzanne Collins popular book series The Hunger Games helped popularize dystopian teen novels and with a strong female protagonist Katniss Everdeen it was no surprise that a popular movie franchise would emerge with actress Jennifer Lawrence portraying the lead. Many critics of the book and film noted the story borrowed heavily from the Japanese book and film Battle Royale in that both movies had teenagers killing one another due to government directives. Collins stated her inspiration was the story of Theseus, reality television and attitude toward the wars in Iraq and Afghanistan. 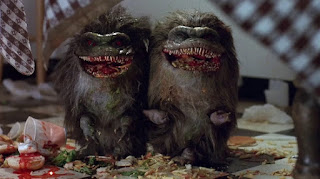 Stephen Herek's movie Critters features two shape-shifting bounty hunters trying to capture dangerous furry aliens called Crites that escape and land on Earth. Once Earthbound a group of Kansas locals fight off the Critters with the help of the bounty hunters. When Critters was released, it was unfairly called a ripoff of Gremlins as both films featured mischievous little creatures. To be fair Director Herek wrote the screenplay before Gremlins was released and changes were made that helped the film stand on its own. Since its released Critters was followed by three sequels and 2019 series on Shudder. 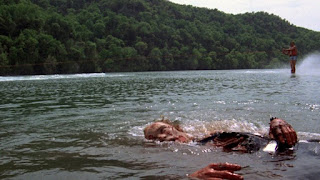 Joe Dante's Piranha has the unique distinction of being one of the few horror movie ripoffs that are appreciated by the director of the film it borrowed from with the movie being the 1975 film Jaws. Piranha is about a government program that enhanced piranhas to make them more deadly only to see them accidentally released into popular tourist camps. Piranha was directed with satire on the 1975 summer blockbuster Jaws, and this helped Steven Speilberg to appreciate the film and not sue the studio as other knockoffs had been. 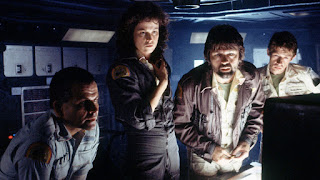 Alien (It! The Terror From Beyond Space)

One of the best horror and sci-fi films of the 1970s, Aliens was a huge success when it was released and has created one of the most successful horror movies franchise with its sequels, prequels and tie ins to the Predator franchise. However even a great film like Alien did borrow from a couple of films. The most obvious is the 1958 film. It! The Terror from Beyond Space that has a spaceship landing on Mars and leaving with a hostile alien intruder that stalks the crew. The other film that may have inspired Alien is the 1965 Mario Bava film Planet of the Vampires that would also inspire 2012 Prometheus.

Invasion (Invasion of the Body Snatchers)

The 2007 SciFi thriller Invasion starred Nicole Kidman and Daniel Craig and started as a remake of Invasion of the Body Snatchers. The movie had several changes made that made it different from the previous films and sourcebook enough that it be said to be an original work. Despite this, the film still carried the same premise of people being taken over by an extraterrestrial influence that changes peoples personalities and leaves a small group of unaffected people searching for help. 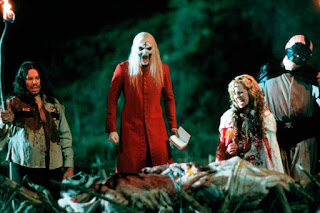 Rob Zombie's first movie was a wild ride that felt very much like an exploitation movie of the 1970s. Four young people researching roadside attractions are drawn to the legend of Dr. Satan after they stop at a gas station run by a man dressed as a clown named Capt Spaulding. They then pick up a hitchhiker who takes them to her family home where their fate is in the hands of her crazy family. House of a Thousand Corpses was undoubtedly influenced by the Texas Chainsaw Massacre as well as The Hills Have Eyes. In many ways, the film would have been a better remake of TCM than the recent one released in 2003. The gritty feel and violence did not win critics over, but the film has gained a cult following and is followed by a sequel that was better received. 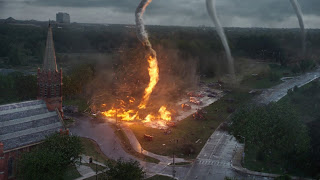 Into the Storm (Twister)

The late nineties saw a slew of disaster films that made use of the advances in special effects and CGI with Twister being one of the most successful. The 2014 movie Into the Storm pretty much follows the same disaster script but tells it as Found Footage with several people using cellphones to record the events of the deadly storms. Although the movie tries to tell a story the special effects pretty much take over as most of the cast is forgettable save for two recurring idiots who act as comic relief. 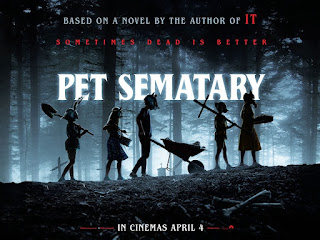 Remakes are often met with mixed feelings as purists automatically reject any followup that they feel is unnecessary while others enjoy a fresh perspective on previous work. Stephen King's Pet Sematary was a big hit in 1989 despite mixed reviews; many thought it was too much a slasher while others enjoyed the shocking twists that made it a favorite film. The plot of 2019 adaptation directed by Kevin Kölsch and Dennis Widmyer has a family of four moving to a small town in Maine where Dr. Louis Creed takes a job as a physician at the local university. The home they move into has a forest surrounding it where the local children bury their deceased pets in a nearby pet graveyard. The daughter Ellie meets the elderly neighbor Jud who tells her father Louis about the darker history of his property after their cat is killed by a truck on the road bordering the house. It is this dangerous road that will lead the Creed family into turmoil and some bad decisions after a tragic accident occurs. The 2019 version of Pet Sematary deals with some intense family issues including losing a beloved member of the family and the guilt it may bring to the survivors. Whereas the first film relied on straight up scares, this version is more psychological exploring the evil forces within the forest manifesting the pain and suffering of the wife and husband as events from their past and present force them to confront their anxieties. As both films leave out some details from the book, this version has also been met with some concern over plot changes. Directors Kölsch and Widmyer make use of this change to help advance the story and to better explain some of the more darker aspects of the story. The new version of Pet Sematary may not please all, but it does offer a terrifying look at family loss and the mistakes made when someone tries to cheat death.