I will be posting Christmas themed horror films over the next 24 days of LosMas; for the nineteenth night, I am listing 2015 found footage horror comedy The Visit. 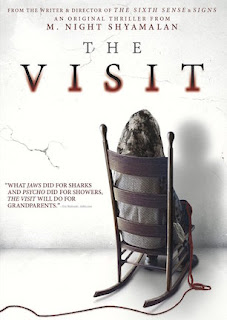 M Night Shyamalan made a significant impact with his films The Sixth Sense, Unbreakable, and Signs, yet his follow-up films were a huge disappointment given those three films' success. His 2015 film The Visit was a surprise success and gave Shyamalan a much-needed hit. Becca (Olivia DeJonge) and her younger brother Tyler (Ed Oxenbould) are invited to stay with their maternal grandparents over the Christmas holiday as their mother will be on a cruise with her boyfriend. The children have never met their grandparents, and Olivia decides to video the events of the week. Their grandparents seem normal at first, but some strange events alarm the children prompting them to contact their mother, who shares disturbing news with them. The Visit was a success for Shyamalan, and the film earned praise from critics and fans who appreciated his return to form.