I will be posting Christmas-themed horror films over the next 24 days of LosMas; for the first night I am posting Silent Night, Deadly Night 4 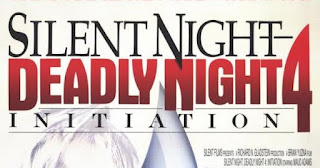 An LA reporter finds herself caught up with a cult of feminists who worship Lilith, the biblical first wife of Adam before Eve replaced her. She then has to avoid certain death as the group targets her for their ceremonies and unknown purposes. Silent Night 4 is an odd entry in this franchise; there is no significant tie-in to the first three films except for a reference to a killer Santa on a television screen. However, don't let this deter you; the film is not too shabby compared to the rest of the pack. Maud Adams appeared in this film that could have easily carried itself fine if released on its laurels. There are decent special effects and some creepy critters, including Clint Howard, and you have a film worth catching on Tubi TV.

Posted by The Losman at 8:46 PM No comments: