I will be posting Christmas themed horror films over the next 24 days of LosMas; for the ninth night, I am listing the 2009 zombie movie Silent Night, Zombie Night 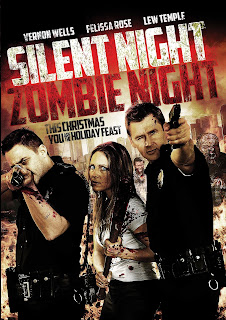 A police officer facing problems with his wife and his partner must put aside his grudges and work together as a zombie outbreak threatens LA as Christmas approaches. With few options and low on ammunition, the trio must decide if they can trust others as they venture out to safety. Directed by Sean Cain, Silent Night Zombie Night is no different from the dozens of other low-budget zombie movies yet the cast played by Frank Forcinito, Andy Hopper, and Nadine Stenovitch are convincing in their roles. One of the faults with the movie is the use of CGI instead of practical special effects that would have made the action scenes and zombie kills look more convincing. I should also note that the movie poster is misleading as it lists three popular horror movie actors instead of the movie's real stars.