I will be posting Christmas themed horror films over the next 24 days of LosMas; for the sixth night, I am listing the 2015 slasher Dismembering Christmas. 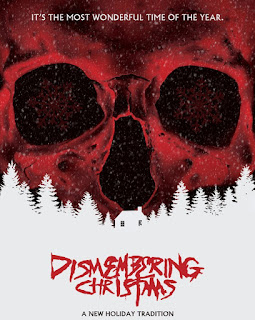 Seven high school students decide to stay in an isolated family cabin to party before attending a Christmas Eve wedding. Once there, they encounter a couple of townies who warn them of bad things occurring. Ignoring these requests, they soon find they are now at the mercy of a black-clad killer taking them out one at a time. Dismembering Christmas is a low budget film produced by Slasher Studios and directed by Austin Bosley. Following the usual slasher gamebook, this movie does mimic the style of an 80s summer camp movie but changing the setting to the winter holidays. The cast is adequate, and the events play out without losing too much attention for the audience. Despite the movie's low budget, horror fans will appreciate the practical special effects and creative kill scenes that will leave you guessing who is next and who will survive. Dismembering Christmas is better than most Christmas themed horror movies and would still be a decent movie even if it was set during the summer.