I will be posting Christmas themed horror films over the next 24 days of LosMas; for the fourteenth night, I am listing the 2006 French horror movie Sheitan. 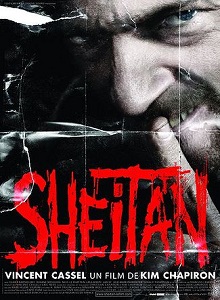 A trio of young men and their female friend partying in Paris decide to follow a mysterious woman named Eve to her family's remote chateau in the French countryside to party during the Christmas holiday. They arrive and meet Joseph, the local caretaker and goat herder who's bizarre manners annoy and irritate the men. The group soon discovers that they are not safe around Joseph or the creepy villagers they encounter. Sheitan was directed by Kim Chapiron and starred French actor Vincent Cassel who portrays Joseph in a role that he truly made his own. The film is one of the more bizarre entries in the New French Extremity movement with its intense violence and plot that mimics The Texas Chainsaw Massacre without ripping it off. Vincent Cassel co-produced the film, and his then-wife Monica Bellucci does have a cameo.