I will be posting Christmas themed horror films over the next 24 days of LosMas; for the eleventh night, I am listing the 1972 horror anthology Tales From the Crypt. 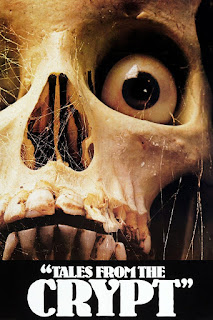 Based on the EC horror comic book "Tales From the Crypt," this British anthology movie features a mysterious crypt keeper who tells five terror tales. The film evokes the dark comic book's eeriness as well as the violence in its terrifying stories. One sequence titled "..and All Through the House" features a woman who murders her husband only to encounter a deadly Christmas intruder. This sequence featured British actress Joan Collins and was remade in 1989 as part of HBO's Tales From the Crypt horror anthology series.