I will be posting Christmas themed horror films over the next 24 days of LosMas; for the tenth night, I am listing the 2017 dystopian horror movie I'm Dreaming of a White Doomsday 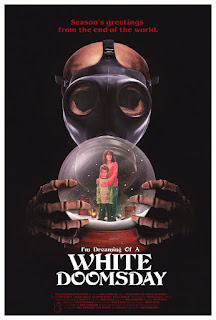 A mother (Hope Bikle) tries to shield her young son (Reeve Blazi) from the horrors of an unspecified apocalypse that has them living in an underground bunker. With their supplies running low and her husband missing, she faces a cruel set of choices as Christmas approaches. Written and directed by Mike Lombardo, I'm Dreaming of a White Doomsday is a dystopian horror movie set in a world that has suffered a great tragedy leaving its survivors to face a prolonged and hopeless fate. Lead actress Hope Bikle is well cast as the mother, and child actor Reeve Blazi shows great promise as her child Riley. I'm Dreaming of a White Doomsday is a holiday horror movie that shows a bleak and depressing world that is usually more common in zombie thrillers.