I will be posting Christmas themed horror films over the next 24 days of LosMas; for the twenty-second night, I am listing the 2020 black comedy thriller Fatman. 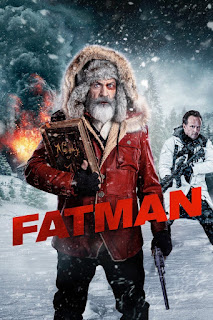 With the world changing so much, it is no wonder that Chris Cringle is feeling jaded and bitter about his yearly task. Facing budget cuts and pressure from the Government to provide gifts to all the kids, even the awful ones, Chris feels more grizzled than ever. One exceedingly terrible kid gets coal for his horrendous behavior and decides to hire an assassin to teach that 'Fatman' a lesson. "Fatman" is a dark comedy starring Mel Gibson and Walton Goggins in a story that looks like it came from the 80's movie Scrooged. The plot is absurd but played out to make the film entertaining for fans of the darkly humorous subject matter. Mel Gibson is great as the not so jolly Chris, but Walton Goggins is fun to watch as the determined assassin who never got anything but coal from Christmas.