I will be posting Christmas themed horror films over the next 24 days of LosMas, for the second night, I am listing the 1971 thriller Whoever Slew Auntie Roo? 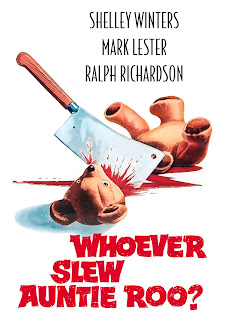 Long before slashers took over the horror scene, one of the more interesting niche genres was the "Psycho Biddy" craze that featured Oscar-winning actresses in their later years starring in a series of horror thrillers. These movies included "Whatever Happened to Baby Jane," "Hush Hush Sweet Charlotte," and "What's the Matter with Helen?"

"Whoever Slew Auntie Roo?" was one of these films featuring Oscar-winning actress Shelley Winters as a wealthy widow who hosts several local orphans for the holidays in her vast estate. Calling herself "Auntie Roo," she hosts a holiday banquet and gives the children toys to compensate for losing her daughter years before. Two orphans draw her attention as the young girl reminds Auntie Roo of her deceased child while the brother suspects she may be hiding ill intentions. "Whoever Slew Auntie Roo?" is a dark take on the tale of Hansel and Gretel, with the two children fearing the seemingly sincere intentions of the old woman who does indeed hide a dark secret. Not a real horror movie, the film is a decent take on the classic fairy tale with Shelley Winters excelling in her role as Auntie Roo. A fun twisted fairy tail for those looking for a fun Christmas themed thriller.