I will be posting Christmas themed horror films over the next 24 days of LosMas; for the sixteenth night, I am listing the 2013 zombie comedy Stalled. 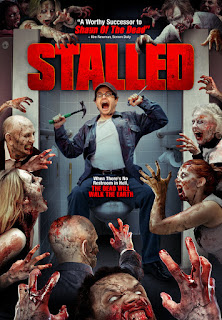 A maintenance man finds himself stuck in the women's room as an office Christmas party turns into a zombie feast trapping him in a toilet stall. He soon learns a woman is also trapped, and the two try to determine the best way to survive when all avenues of escape are out of reach. Stalled is a 2013 British horror comedy directed by Christian James and written by Dan Palmer, who also stars as WC, the maintenance man. Stalled is inspired by Shaun of the Dead and centers on an average joe taking charge when the world around him falls apart. The film's special effects and zombie makeup are decent but what sets the movie apart from the dozens of other "zom-coms" are the special moments between the two prominent roles. Stalled is an excellent holiday horror-comedy that will delight fans of Shaun of the Dead, Tucker and Dale vs. Evil, and Army of Darkness.