I will be posting Christmas themed horror films over the next 24 days of LosMas, for the first night, I am listing the 2018 Horror Comedy Santa Jaws. 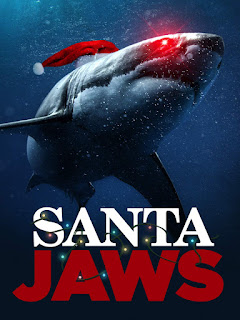 A teen graphic artist helps create a graphic novel with his friend featuring a Santa themed shark. He is surprised to see his creation come to life as it stalks his family and community after he is frustrated by the holiday's stresses. Santa Jaws is undoubtedly one of the more absurd Christmas Horror titles as it swims into the popular fantasy shark attack genre that movies like the Sharknado franchise helped spawn. Despite its low budget and bargain CGI, the film has some fun creatures kills and a pair of young, likable heroes who bond as they try to defeat this Christmas-loving menace. Misty Talley directed Santa Jaws as a campy B movie and has made a career with other shark-themed films that are often found on SyFy Channel and Tubi.