I will be posting Christmas themed horror films over the next 24 days of LosMas, for the fifth night, I am listing the 2017 slasher Once Upon a Time at Christmas 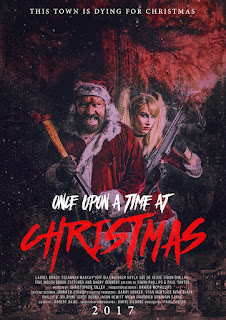 A small New York town is living in fear as a murderous duo dressed as Santa and Mrs. Claus murder citizens in a pattern that plays into the 12 Days of Christmas. As the police are left baffled, a young woman fears she may be next as the murders get closer to her. "Once Upon a Time at Christmas" was released in 2017 and was helmed by British director Paul Tanter. Simon Philips plays the killer Santa and is pretty terrifying in the role, but Sayla de Goede's Mrs. Claus channels too much "Suicide Squads" Harley Quinn, and as a result, her role seems less scary and more copycat. As a holiday horror movie, "Once Upon a Time at Christmas" fails to stand out with its all too predictable pace and cliched plot. The real crime was using CGI for the murder scenes instead of practical special effects that would look more natural. Overall the movie joins a collection of mediocre holiday slashers that will show up on streaming clients and Red Box.