I will be posting Christmas themed horror films over the next 24 days of LosMas; for the twenty-first night, I am listing the 2020 slasher Slayed. 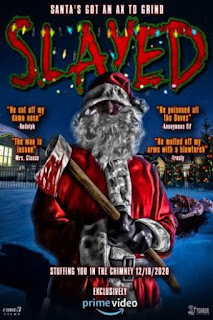 Five years after a massacre occurred in a small water treatment plant, the facility is being shut down on Christmas Eve. A new security guard arrives to watch the facility for one last night, but the rest of the staff fears the return of the Santa clad killer on the anniversary of his evil deeds. "Slayed" is a low-budget holiday slasher that offers very few kills, mediocre special effects, and a plot that moves too slow for a story that could have been done as an anthology short focusing on the opening massacre. This scene would have made a better movie if they had concentrated on that story instead of the follow-up events that we got instead.