I will be posting Christmas themed horror films over the next 24 days of LosMas; for the seventeenth night, I am listing the 1983 supernatural slasher Bloodbeat. 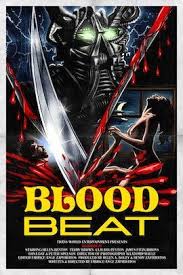 A family gathers for the Christmas holiday in rural Wisconsin; the mother Cathy senses negative energy in her son's girlfriend Sarah, making her uncomfortable. Her presence unleashes a series of murders in their community and a mysterious trunk that contains a samurai warrior's armor.  A psychic battle awaits as the mother discovers what is behind the deadly attacks and how it may tie in with their guest. Bloodbeat is a confusing mix of slasher and supernatural with enough confusion to make you want to watch again. The film is difficult to describe, but the bizarre blend of cheesy special effects, bad dialogue, and bat shit crazy plot makes this a cult classic deserving of Joe Bob Brigg's Last Drive-In. The director Fabrice-Ange Zaphiratos admitted that he was under the influence of drugs as he wrote and filmed portions of the movie. Bloodbeat is undoubtedly one of the weirdest Christmas horror movies and certainly will get more viewings with the film streaming on Amazon Prime and Shudder.