I will be posting Christmas themed horror films over the next 24 days of LosMas, for the fourth night, I am listing the 2015 psychological thriller Body (2015) 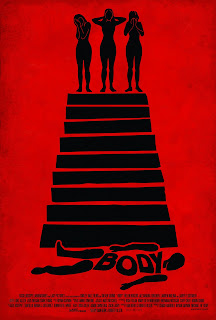 Three young women bored on Christmas Eve decide to follow a friend's suggestion to visit her uncle's mansion and enjoy some fine living while he is on vacation. Yet their night of games, drinking, and fun is interrupted by the groundskeeper and the realization they are trespassing. The situation is worsened when the man is severely injured in a struggle leaving the three to decide if they will report the accident. "Body" is a 2015 psychological crime thriller directed by Dan Berk and Robert Olsen; the film stars Helen Rogers, Alexandra Turshen, Lauren Molina, and Larry Fessenden. The film does present some challenging moral dilemmas involving friendship and how far one is willing to protect someone who is making a terrible situation worse. "Body" does benefit from some great roles, especially Ms. Rogers and Ms. Turshen, as well as veteran indie director and producer Larry Fessenden in the eponymous role.