I will be posting Christmas themed horror films over the next 24 days of LosMas, for the sixth
night, I am listing the 2018 Black Comedy Sick For Toys. 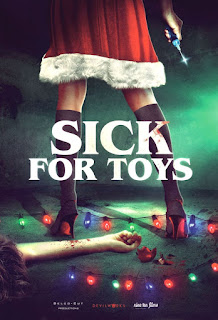 After his best friend disappears, a young man named Roy encounters a woman named Emilia who claims to have met with him. He soon accepts a dinner date with her and finds himself in the middle of an awkward dinner with her and her overprotective brother Edward. When the subject of her Christmas toy comes up, Emilia shows a childlike glee, but Roy will learn that her joy hides a sinister intent. Sick For Toys is a psychological thriller directed by David Del Rio from a story written by James Andrew Oster and Justin Xavier. Camille Montgomery delivers top-notch performance in a role that balances Emilia's childlike innocence with her darker side. Jon Paul Burkhart also stands out as the creepy older brother who tries to protect Camille but also indulges in her sadistic behaviors. Sick For Toys is a genuinely twisted Christmas movie and reminded me of the family dysfunction seen in The House of Yes and We Are What We Are.
Posted by The Losman at 12:09 AM