I will be posting Christmas themed horror films over the next 24 days of LosMas, for the twenty-second night, I am listing the 2018 Horror movie Christmas Blood. 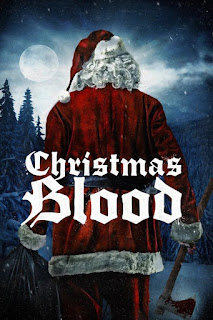 A Scandinavian town has been living in fear as an ax-wielding maniac dressed as Santa Claus has left numerous dead bodies and with the police at a loss to stop him until one cop finally catches and shoots him. Years later, a group of friends gathering for a holiday party finds themselves being stalked by the same lunatic dressed as Santa Claus, who was feared dead. Christmas Blood is a Nordic horror film that follows the usual women in peril script but does not shy from the gore and suspense that is sometimes lacking today. The killer is given little to no dialogue or shown to be anything more than a relentless killer in the tradition of Michael Myers or Jason Voorhees. The tension felt by the victims is portrayed well by the cast, including a genuinely bloody scene that will not be forgotten. The only fault in the film is the lack of proper lighting that makes the film difficult to watch at times, especially when the actors are shown outside in the snowy darkness. Christmas Blood is a traditional slasher film that will remind viewers how much we were terrified by films like Halloween and Black Christmas.
Posted by The Losman at 11:33 PM