I will be posting Christmas themed horror films over the next 24 days of LosMas, for the fifteenth night, I am listing the 2007 Horror Thriller Wind Chill. 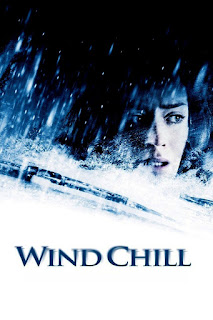 Most winter horror movies outside of Christmas horror often involve people having to fight the elements for survival. Gregory Jacobs 2007 thriller Wind Chill is such a movie with a cast that includes Emily Blunt and Ashton Holmes. A young woman seeks a ride home during winter break and decides to ride with a classmate she does not know. Along the way his behavior makes her feel uncomfortable as he seems to know much more about her than she has told him. Things take a darker turn when he takes a shortcut that strands them in the middle of nowhere outside of cell coverage and any means of help. As a winter storm makes it colder, the two begin to see apparitions that make them question their sanity along with their safety. Wind Chill is an isolation horror film with a supernatural element. The cast of the film and setting work well in showing the genuine fear of being stranded without the hope of rescue. The film's supernatural twist does add to the fear but in many ways, seems unnecessary as the movie already works as a thriller. While not a pure Christmas horror movie, Wind Chill is a decent winter horror tale that will make us all think about packing extra supplies on a long road trip.
Posted by The Losman at 1:38 PM