I will be posting Christmas themed horror films over the next 24 days of LosMas, for tenth night, I am listing the 2013 Horror movie Krampus: The Christmas Devil. 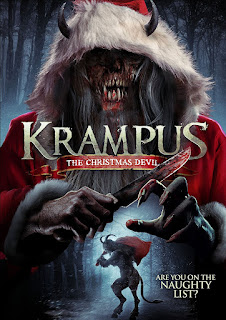 In recent years there has been a flood of Christmas horror movies featuring Krampus as the villain. The 2013 horror movie Krampus: The Christmas Devil was written and directed by Jason Hull and featured Bill Oberst, Jr in a small role. As a child, Jeremy was captured by Krampus and held as a prisoner for being a naughty child; he would escape and become a policeman as an adult. When children begin to disappear, Officer Jeremy suspects that Krampus may be behind it and sets out to stop it before more children disappear and die. This low budget movie offers nothing of note, but it does feature a story that focuses on the legend of Krampus and his relationship with Santa Claus. Character Villian actor Bill Oberst, Jr plays creepy psycho, but his role is small and could have made the movie better if he had been the focus of the story. Krampus: The Christmas Devil is one of the first movies to feature this holiday demon and predated the bigger Krampus movie of 2015 starring Adam Scott and Toni Collette but will only find an audience by people who watch thinking its the more famous film.
Posted by The Losman at 12:31 AM