I will be posting Christmas themed horror films over the next 24 days of LosMas, for the second
night, I am listing the 2018 Horror Comedy Slay Belles. 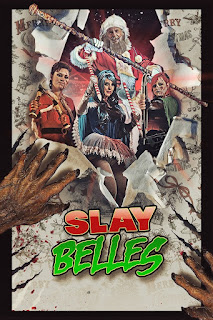 Youtube Cosplay girls Alexi, Dahlia, and their girlfriend Sadie go urban exploring at an abandoned Santa themed amusement park. Once inside, they accidentally release a deadly creature and are surprised when an older man calling himself Santa Claus offers to help capture the beast called Krampus. Slay Belles is not a serious horror movie but does feature some comedic moments, a terrifying Krampus monster, and ladies in sexy outfits using makeshift weapons to fight back. Santa Claus is played by veteran actor Barry Bostwick and is joined by Richard Moll and Diane Salinger in smaller roles. The cast of ladies includes Halloween and Zone of the Dead actress Kristina Klebe, Alleluia! The Devils Carnival Susan Slaughter and Hannah Wagner. Easily one of the better movies featuring Krampus, Slay Belles does offer a modern twist to the good vs. evil tale that does make for a silly but fun Christmas horror-comedy.

Slay Belles can be streamed on Amazon Prime and Tubi
Posted by The Losman at 1:03 AM