I will be posting Christmas themed horror films over the next 24 days of LosMas, for the first night, I am listing the 1987 slasher movie Silent Night, Deadly Night Part 2. 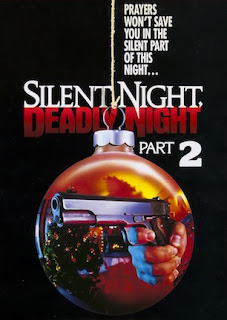 Silent Night, Deadly Night Part 2 (1987)
Dir- Lee Harry
If only the final encounter could genuinely be the last. It seems the younger brother of the killer Santa from the first film has decided to wig out as well as take up where big brother left off. We have more of the pointless and often overly cruel murders mixed with flashbacks from the first film. I might point out that there is so much footage from the first film that you begin to wonder if these two films were made at the same time by two different directors using the same script. Silent Night II is a very mean spirited film, and compared with the first only makes you want to avoid it even more. I didn't even tell you that it was also trying to be funny with its infamous "Garbage Day" line being a popular meme.
Posted by The Losman at 12:01 AM