I will be posting Christmas themed horror films over the next 24 days of LosMas, for the eighteenth night, I am listing the 2018 black comedy movie Secret Santa. 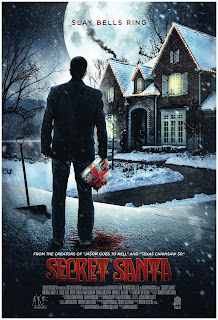 A Christmas dinner for a wealthy but dysfunctional family gets rather violent after a dispute leads to the death of a guest. Tempers flare as the family begins to turn on various family members as the eldest daughter tries to calm the situation only to find a more significant threat to their safety at play. Director Adam Marcus is best known for his work on Jason Goes to Hell and has full reign on this dark comedy that gets quite violent as the holiday evening goes on. The mostly unknown ensemble cast works excellently together with every role standing out in their own unique but effective way. The blood and gore effects are excellent thanks to Wishmaster veteran makeup artist Robert Kurtzman. The film's dark tone is peppered with enough humor to make the movie less disturbing and more enjoyable with some of the more violent murders given an over the top presentation. While not as well known as recent Christmas dark comedy Krampus or Better Watch Out, Secret Santa is a wickedly fun movie that certainly deserves a place as a holiday cult classic.
Posted by The Losman at 11:35 PM