I will be posting Christmas themed horror films over the next 24 days of LosMas, for the third
night, I am listing the 2011 Horror Comedy A Cadaver Christmas. 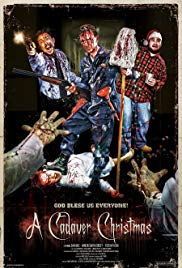 A Cadaver Christmas (2011)
Dir- Joe Zerull
A lonely Christmas Eve in a dive bar is interrupted by a blood-splattered guy who casually walks in and asks to use the restroom. After ordering a beer, he confesses the crazy events of the night. He drags the two occupants along with a policeman to the local university where they face off against animated cadavers. Ok, let us make one thing clear as the title of this film states; this is not a zombie movie. It is a cadaver movie. The action is outlandish, with blood flying as they fight off the army of corpses in a gore-filled battle royale. The quality of the video is grainy and appears to be a deliberate attempt to make this movie look like a bad VHS print of a grindhouse movie. A Cadaver Christmas works well with a cast of unknown actors who play their roles effectively and make this movie an enjoyable bloodfest in a genre that has too many copycats.
Posted by The Losman at 1:20 AM