I will be posting Christmas themed horror films over the next 24 days of LosMas, for the ninth
night, I am listing the 1989 French Thriller Deadly Games. 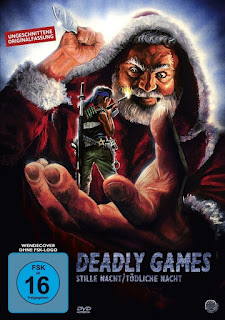 Home invasion movies are often an excellent subject for horror as it is something we all can relate to and find quite scary. "Deadly Games" is a 1989 French horror thriller directed by René Manzor and released in France as 3615 code Père Noël. In the film, a young boy named Thomas is left at home with his ailing grandfather and a pair of servants as his widowed mother takes care of a holiday party. During the event, a man hired to play Santa Claus is fired for hitting a child, and he decides to get back at Thomas's mother by breaking into their house. Yet he is unaware that Thomas is a gifted child, and the house has a high tech set of cameras that he uses to set up traps and evade what he thinks is an angry Santa Claus. In many ways, this film is quite similar to the 1990 holiday film Home Alone, yet Deadly Games lacks the humor and slapstick use of household objects to fight back. The young star Alain Lalanne shows a genuine knack for technology and a love for action movies that show Thomas as a kid who you would not want to face off against in any situation. The evil Santa played by Patrick Floershim is menacing and scary enough to make any kid want to avoid Santa. The movie was not generally available in the United States outside of poorly made bootleg copies but is now available with a refurbished print on streaming services and home video.
Posted by The Losman at 1:53 PM