I will be posting Christmas themed horror films over the next 24 days of LosMas, for the third
night, I am listing the 2018 Horror Anthology Unholy Night. 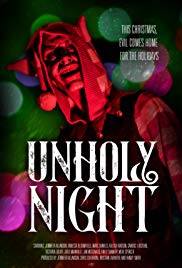 Unholy Night (2018)
Unholy Night is a low budget Canadian anthology horror movie with segments directed by Chris Chitaroni, Kristian Lariviere, and Randy Smith. The overnight shift in a hospital on Christmas Eve is the setting for a night duty nurse who listens to a series of scary tales from an older man named Mr. Iblis. The stories get creepier as the nurse begins to feel more uncomfortable with the direction they lead too. The tales include a young man meeting his girlfriend's family; Three women summon the ghost of a deceased girl after a night of drinking, and the nurse visits her mother only to face her cruel treatment that goes back to her childhood. Actress Jennifer Allanson's role as Nurse Lily is both charming and wicked. Jim McDonald's role as Mr. Iblis helps tie all the stories together in a film that works better than many of the more significant budget indie films released the same year.
Posted by The Losman at 2:03 AM