I will be posting Christmas themed horror films over the next 24 days of LosMas, for twelfth night, I am listing the 2016 Horror movie Krampus Unleashed. 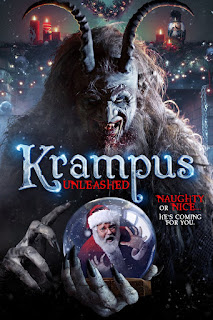 A group of treasure hunters looking for buried gold accidentally unleash the Christmas demon Krampus who makes short work of them. Decades later, a family gathering in a desert community faces the wrath of Krampus after he is unleashed again when a young boy finds an idol. In a break from the usual Christmas horror movies, Krampus Unleashed stands out as the only movie set in Arizona. The unique setting does seem a little out of place. Still, the rest of the film is your standard monster movie with the family fighting an unstoppable beast that can only be defeated by the convenient encounter of a local expert. Krampus  Unleashed was produced, written and directed by Robert Conway, who also made Krampus: The Reckoning a year prior. The creature's design of the Krampus is worth noting as well as the gore effects. The cast was adequate with actress Amelia Brantley standing out as divorcee neighbor Bonnie Tyler. As one of many movies with the name Krampus this version is not as poorly made as other films but is nowhere near as great as the 2015 Michael Dougherty classic.
Posted by The Losman at 7:24 AM