I will be posting Christmas themed horror films over the next 24 days of LosMas, for the nineteenth night, I am listing the 2018 Horror movie The Chicken Party. 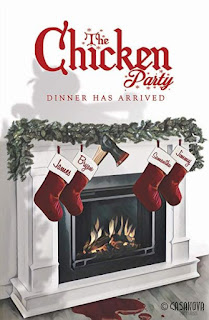 In many horror movies in recent years, we have seen the fears of traveling overseas in exotic countries facing unknown perils. Yet in a twist 2018's The Chicken Paraty has two Japanese women coming to the United States and attending whet they think is a friendly social gathering. Koume (Megumi Kabe) and her younger sister Sakura (Ami Simada) are enjoying a week in Los Angeles when they meet two women who invite them to attend their Chicken Party. The party is described as a way to invite foreign travelers to their homes so they can socialize and build friendships. The event seems to go well as the two sisters meet men and women from Korea, France, and Central America. The party does take a sudden dark turn when the true intentions of the hosts are revealed. The guests are preyed on and have to fight for their lives. The Chicken Party takes the premise of the most dangerous game and adds the element of Ugly Americans in a plot that does share some similarity to The Purge franchise. The actresses who play sisters speak mostly in Japanese and display a bond that makes them believable as siblings. As the events unfold, it is this dynamic that works strongly for the mostly unknown cast. The film does have the look of a student film, but the performance of Ms. Kabe and Ms. Shimada do help with the dark events that are shown.
Posted by The Losman at 2:03 AM