I will be posting Christmas themed horror films over the next 24 days of LosMas, for Seventeenth night, I am listing the 2016 British Horror movie Good Tidings. 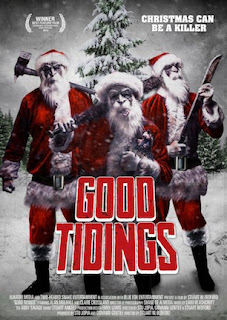 A homeless war vet brings other homeless people together in an abandoned building for the Christmas holiday to share some joy. The celebration is interrupted by a trio of Santa dressed psychopaths who lock them in and proceed to murder all of the people they encounter. As he tries to save as many of his friends, he has to rely on skills he thought were long buried to fight back against these invaders. Good Tidings is an independent British horror film directed by Stuart Bedford, the cast is mostly unknown but seems convincing in their roles. The film has some similarities to The Purge and mirrors the class warfare that is a part of that franchise. Good Tidings works as a compelling siege film and class warfare film with its sadistic villains and sympathetic victims, the film will keep you in edge to the end.
Posted by The Losman at 10:23 PM