I will be posting Christmas themed horror films over the next 24 days of LosMas, for the twenty-third night, I am listing the 2019 slasher movie, Black Christmas. 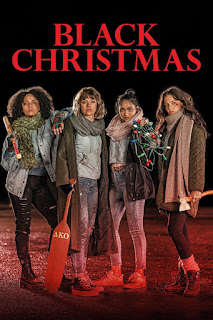 Remakes of popular genre films are often treated with scorn and derision by purists who feel that some films are sacred and should be left alone. The 1974 film Black Christmas was not only one of the first slasher movies; it is also considered by fans and critics to be the best Christmas horror movie with its terrifying plot and an excellent cast. The movie was remade in 2006 with director Glen Morgan expanding the role of Billy and giving him a backstory. The film was savaged by critics and family groups due to its Christmas day release yet was accepted by some horror fans for the good cast and gory murders. In an attempt to bring the film to a new generation producer Jason Blum announced another remake of Black Christmas, this time directed by a woman. Sophia Takal co-wrote and directed this version that would introduce more feminist themes and a more empowered cast of women. 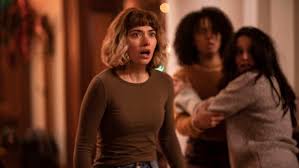 The movie takes place on the fictional campus of Hawthorne College with the girls of MKE sorority getting ready for the last holiday event of the season after exams only to find they are getting threatening messages from an unknown person who is targeting them. One sister named Riley (Imogen Poots) has been struggling with personal issues and is concerned when her sisters seem to be disappearing after they spoke out against a fraternity known for supporting the old college's traditions. Alone in their sorority house with a few of her sisters, they must fight off an attack by a hooded figure who seems intent on killing them all. 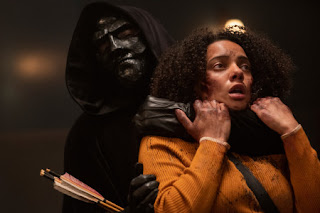 The announcement of the second remake of Black Christmas has met with criticism from fans of the original.  People also objected to the movies PG-13 rating as well as a preview that revealed too much of the plot. The film was released on Friday the 13th with negative reviews and immediate objection to the lack of gore and graphic violence. The film has received some praise for the strong feminist message and cast that includes Imogen Poots, Aleyse Shannon, Lily Donoghue, and Brittany O'Grady. I enjoyed the first hour of the movie as it introduced the cast and showed the threatening messages that would put the ladies on edge. Yet the film falls apart with an absurd storyline that was not a part of the other movies and feels unnecessary given the film's portrayal of a patriarchal system that conflicts with the young women's beliefs. Although the film does have a satisfying ending that will excite a female audience, it does not excuse the absurd plot that tries to introduce a supernatural element to a movie that is purely a slasher film. Black Christmas is nowhere near as good as the 1974 classic film but does surpass the 2006 version with its cast of dynamic actresses who do excel in their roles.