I will be posting Christmas themed horror films over the next 24 days of LosMas, for the seventh night, I am listing the 2015 Horror slasher Christmas Slay. 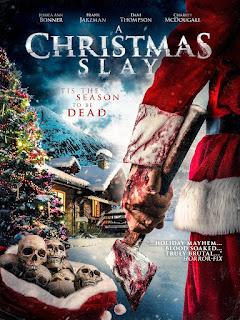 A Christmas Slay (2015)
Dir- Steve Davis
One family's Christmas Eve is shattered when a serial killer dressed as Santa breaks into their home and brutally murders them. A year later, a trio of young women takes a trip to the Scottish Highlands to celebrate Christmas and have a girls getaway. This trip is interrupted by the same manic who, after escaping captivity stalks and murders the group and others who are around. Christmas Slay is a 2015 British horror movie directed and written by Steve Davis. The cast of women includes Jessica Ann Bonner, Dani Thompson, Lyda Kay, and Evil Santa, played by Frank Jakeman. Christmas Slay offered nothing that has not already been done before in numerous slashers involving women in peril. The Santa dressed killer does make for a good villain as his intimidating size makes him almost unstoppable in a country were weapons are not commonplace. Overall the effort works better than most Christmas themed horror but could have easily been set in a deep woods cabin or sorority house.
Posted by The Losman at 6:08 PM