I will be posting Christmas themed horror films over the next 24 days of LosMas, for the twenty-first night, I am listing the 2018 Horror comedy Ugly Sweater Party. 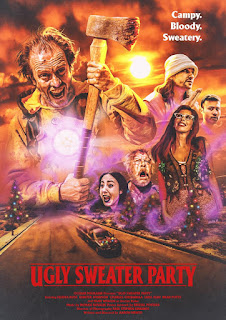 A pair of horn dogs named Cliff and Jody get an invite to an Ugly Sweater Party from slutty twins that they had hooked up with a few months back only to learn that it is a Jesus Camp looking to convert sinners. As the campers enjoy the games and festivities, a sweater worn by Cliff takes control of him and forces him to murder at the behest of a dead serial killer named Declan Rains. The bodies start to pile up as a helpful camp guest named Hanna helps Jody to try and stop his friend before he turns into a killer named Sweater Face.  Aaron Mento wrote and directed Ugly Sweater Party with a style along the lines a Troma movie and Evil Dead. The cast includes horror movie legends Felissa Rose and Sean Whalen, who plays the serial killer Declan. The movie does not take itself too seriously, and it pays homage to summer camp horror classics Sleepaway Camp, Friday the 13th, and The Burning. The film also included some musical numbers from a heavy metal band that kind of ties in somehow to Sweater Face.  A fun homage to 80s slashers with the right kind of murder and mayhem to make this horror-comedy a potential cult classic.
Posted by The Losman at 11:04 PM