Over the next 100 days, I will present one movie of significances in horror, suspense or thrillers for each year from 1919 to 2018. The next film presented here is 2010 comedy horror movie "Tucker & Dale vs. Evil" starring Alan Tudyk, Tyler Labine, Katrina Bowden, Jesse Moss, Chelan Simmons and directed by Eli Craig. 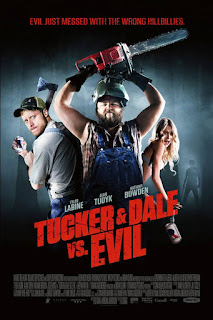 Two simple redneck buddies find their weekend cabin trip interrupted by a pack of seemingly suicidal college students who are having the worst weekend ever. Despite their attempts to offer friendly help, the two buddies find the students are not at all interested in their support until they rescue a young blonde girl who then finds her new friends are being targeted instead of welcomed. As crazy as it sounds Tucker and Dale is a scary movie yet it is one that is turned upside down with the two supposed villains being decent guys who are mistaken for murderous killers by a series of unfortunate circumstances. A well-made film that plays off the clichés of so many horror movies and still delivers a compelling splatstick film that is clever in its concept and very original.
Posted by The Losman at 7:19 PM