Coulrophobia is defined as the irrational fear of clowns and in this list, I have twenty clowns from recent movies and television that are scary as hell. 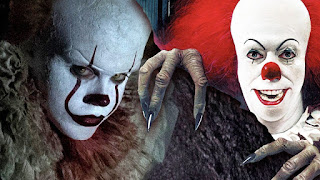 Pennywise the Dancing Clown
The child killing creature featured in Stephen King's novel It is a shapeshifter that takes the form of a clown named Pennywise who terrorizes the town of Darry, Maine every 27 years. His murderous spree is finally challenged by a group of kids who swear a pact to fight and defeat Pennywise. Pennywise has been portrayed by Tim Curry and Bill Skarsgard. 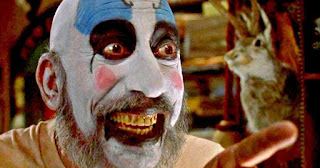 Captain Spaulding
The crusty and vulgar owner of a gas station/museum tourist trap who guides would be victims to their fate by tricking them into the path of the murderous Firefly family. Captain Spaulding is also known for his tasty fried chicken that he offers to his customers. Sid Haig has played Captain Spaulding in Rob Zombie's House of a 1000 Corpses and The Devil's Rejects. 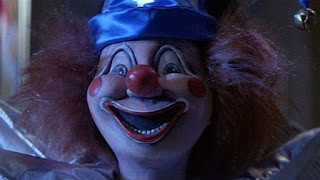 Poltergeist Doll
The Freeling family encounter a malevolent entity in their home which makes their life hell in the 1982 film directed by Tobe Hooper. The son Robbie is terrorized by a tree branch outside his room as well as by a jester clown doll that sits in a chair in his bedroom. The clown doll drags him from his bed and pulls him under until he is able to rip the toy apart. 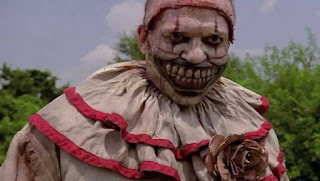 American Horror Story Twisty
Twisty the Clown is a disfigured clown who wears a hideous grinning mask to cover the mangled jaw he suffered from a botched suicide attempt. Twisty's troubled life was the result of jealous carnival workers who falsely spread rumors about him being a child molester. His inability to find work would lead him down the road to suicide and from there Twisty would wander around trying to find children to entertain but instead scaring them with his hideous and filthy appearance. John Carroll Lynch portrayed Twisty in the Fourth Season of American Horror Story. 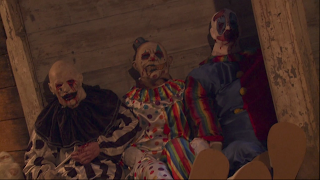 Clown Mannequins in Hell House LLC
While setting up a haunted house attraction in the Abaddon Hotel, the staff of Hell House includes some mannequins dressed up to look like evil clowns. 2015 found footage movie shows the clowns often and in some instances, the clowns appear to move off camera or show up unexpectedly by the surprised staff who at first think there are attempts at pranks but are shocked to learn otherwise. The Clown mannequins are truly scary looking and factor heavily in the events of the movie. 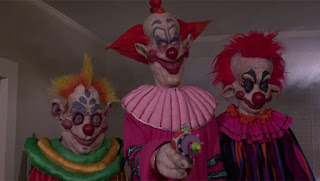 Killer Klowns From Outer Space
A squad of evil aliens who look like circus clowns invade a small town and use their comical looking weapons to trap victims for use as food. A cult classic that has won over fans for its absurd premise and over the top script and special effects. The movie has become more popular over the years and gained new fans due to streaming services offering it for viewing. 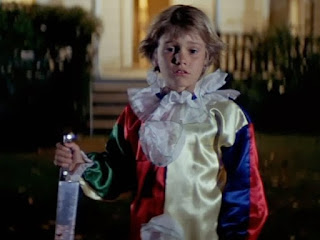 Michael Myers
In the opening of 1978's Halloween, the audience is shown someone wearing a mask and grabbing a knife going into a bedroom where a young lady is stabbed. Afterward, the mask is removed, and we find the killer to be a little boy in a clown costume named Michael. The events that follow will set the stage for one of the most popular slasher movies and the masked villain Michael Myers. 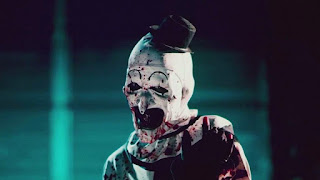 Art the Clown
Featured in the horror anthology All Hallows Eve and The Terrifier, Art the Clown is a murderous demonic figure dressed in a black and white clown costume and makeup. He carries a bag that holds his fabricated weapons and tools that he uses to torture and kills his victims. Art does not speak but expresses his sinister feelings through his dark smile and silent laugh that show his sadistic glee when his victim is frightened or dying. Art, the Clown, was portrayed by Mike Giannelli in All Hallows Eve and David Howard Thorton in Terrifier. 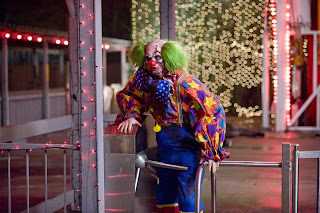 Zombie Clown
In the climax of 2009's Zombieland Columbus is trying to rescue Witchita and Little Rock only to find a zombie clown threatening him. Columbus has a fear of clowns, and this zombie poses a double threat that puts his life at risk as his safety rules are suddenly put to the test. 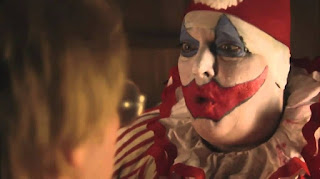 Pogo the Clown
Serial Killer John Wayne Gacy dressed as a clown and entertained children while he was murdering young men and burying their bodies under his home. Gacy is portrayed by Mark Holton in this fictionalized account in the life of Gacy. 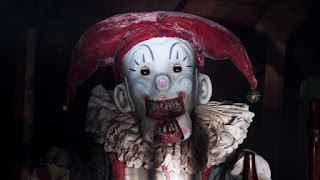 Der Klown
Accompanying the demon Krampus, Der Klown is a jack in the box with sharp teeth, grotesque jaw and worm-like body that protrudes from the music box. Der Klown is portrayed by Brett Beattie. 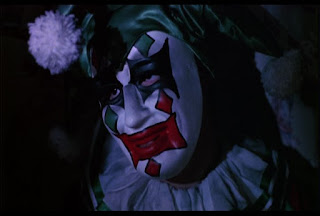 Eric
The serial killer in The House on Sorority Row is driven by revenge after a prank goes horribly wrong. Having grown up in the Sorority house, Eric hides in the attic and kills his victims one at a time and dons a clown costume similar to a music box. Eric is portrayed by Charles Serio. 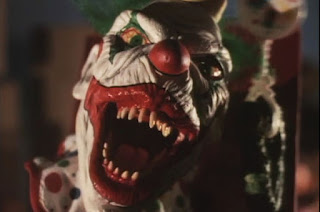 Jack Attack
A blood-stained and evil looking clown that occupies the Jack in the Box in Demonic Toys. Jack can leave the box and move around like a snake where he uses his razor sharp teeth to bite his victims.

Gags the Clown
Playing into the recent mysterious clown phenomena, a small city in Wisconsin is terrorized by an individual dressed as a clown carrying black balloons. What he has in mind is unknown but random citizens cross his path, and it is then that his intentions will be revealed. "Gags" is portrayed by Eric Heuvelman and directed by Adam Krause. 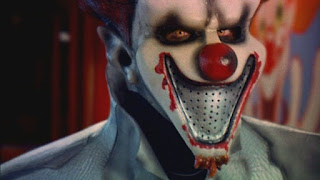 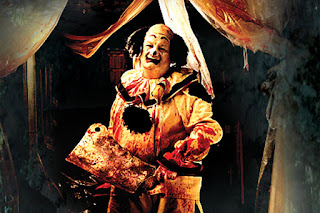 100 Tears
Gurdy, the Clown, was a circus worker who was wrongly accused of raping a fellow circus performer and has to flee after he kills the two who falsely blamed him. He then follows the circus and commits acts of murder as the Teardrop Killer. Gurdy, the Clown, is portrayed by Jack Amos.

Clown
A well-meaning father dons a clown costume he finds in the basement of a home he is selling, the costume contains the spirit of a demon called a Cloyne and won't let him take it off as it forces him to seek out young victims. The Cloyne is portrayed by Andy Power.

31
In 1976 a group of carnies was attacked, kidnapped and forced to play a sadistic game called 31 with three elderly folk in aristocratic attire observing. The carnies are then released into a maze-like set of rooms where they are attacked by murderous clowns known as the "Heads." 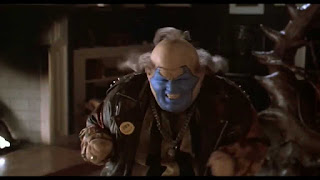 Spawn
John Leguizamo portrays the evil demon named Violator who appears as a morbidly obese clown. Violator serves as a secondary antagonist in the comic book and movie Spawn. 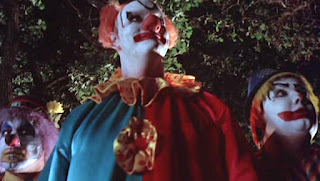 Clownhouse
Three escaped lunatics kill a trio of clowns at the circus and don their makeup, afterward, they target a group of young boys including one who has a fear of clowns. The three clowns break into the home, and a fight of survival ensues as the young boys have to fight off these home invaders.