I will be posting Christmas themed horror films over the next 24 days, for the fourth night I am listing the 2015 Finnish fantasy horror thriller Rare Exports. 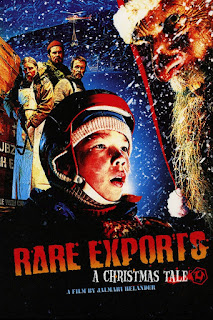 This fantasy thriller directed by Jalmari Helander centers on a small community in Finland that encounters some truly bizarre circumstances when an international mining company digs into a local mountain and finds something unexpected. A pair of local boys sneak into the mining camp and learn that the company is looking for remains of Santa Claus. The boys leave for home as Pietari looks into the legends of Santa Claus and is shocked to discover that the target of the mining company may not be as jolly and friendly as they think. To make matters worse the local herds of reindeer that provide for the community are found slaughtered by something that may have escaped from the dig site. Rare Exports started out as a short film and was expanded to a full-length movie by Jalmari Helander and Juuso Helander after the short became popular on the internet. The film is told in a blend of dark fantasy and deadpan comedy, including some of the mythology of Santa Claus in a movie that shows the extreme life faced by the men in this community and how something out of the ordinary has shaken things up. The absolute bonkers outcome is exciting and filled with the kind of action that will keep the audience entertained enough to not question how absurd the plot is. Ultimately the film is about a father and son having to save the community and bond together as the events threaten to destroy the community and maybe more if is not contained. The movie was well received by critics and has gained a following that has pushed the film into cult classic status.
Posted by The Losman at 12:02 AM