I will be posting Christmas themed horror films over the next 24 days, for the second night I am listing the 2007 horror thriller P2. 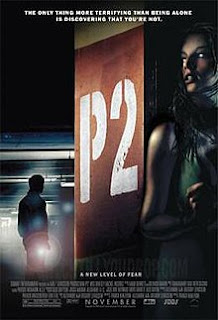 A young lady finding herself stranded in an office parking garage during a Christmas holiday weekend becomes the target of an obsessed security guard who kidnaps her and holds her hostage. A cat and mouse game ensues as the young lady escapes only to find that she is trapped inside the garage with no way out and no one to seek out help from while she is being stalked with no relief in sight. Alexandre Aja produced this film and compared it to his movie High Tension. The movie is a game of survival that takes place in a setting that is not one often seen used in thrillers. Rachel Nichols plays Angela with believability and shows her will to survive and fight back against an attacker who has all the advantages. Despite looking like a slasher film, P2 is a tightly paced thriller featuring a genuinely realistic villain and a situation that would bring anyone true fear.
Posted by The Losman at 9:39 PM