I will be posting Christmas themed horror films over the next 24 days, for the nineteenth night I am listing the controversial 1984 slasher Silent Night, Deadly Night. 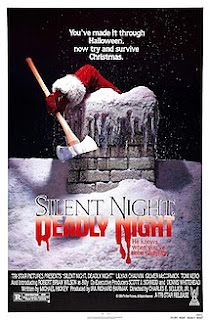 In the almost 35 years since the release of Silent Night, Deadly Night there have been a number of movies that have featured everything from killer elves, Krampus and even a killer Mrs. Claus. Yet none of these films faced the utter shit storm of anger and outrage as the infamous 1984 Santa slasher. Silent Night has a young man who dresses as Santa Claus and goes out killing people. This, of course, stems from the brutal murder of his parents at the hands of some drunken killer dressed as Santa when he was a little boy. The young boy then suffers at the hands of a mean nun and a cruel orphanage. As he gets older he gets a job at a toy store and seems fine until Christmas comes and he is asked to don the red suit to entertain the children. His murderous rampage is triggered by a warped desire to punish those who are naughty. I reviewed this film over 20 years ago and the film has spawned 4 sequels along with a partial remake that has little in common with this film. The original Silent Night has become a cult classic as a result of the controversy, some inventive kills and the mildly campy acting that helps temper a film that is quite mean-spirited even for a slasher. Silent Night was released on the same day as A Nightmare on Elm Street and even outperformed the iconic 80's slasher during the first weekend. The film would be pulled by the studio due to the angry protests from parents groups who objected to Santa Claus being made a villain.
Posted by The Losman at 10:27 PM