Carrie and Prom Night are the two most popular horror movie franchises that feature the prom, these two film franchises have nine titles between them but aren't the only movies that include the big dance. Here is a collection of horror movies and black comedies that include proms as part of their plot. I have ranked from the worst to first 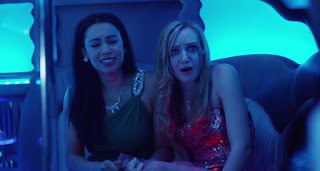 A group of friends taking a limo ride to their prom finds they are being held hostage by someone who is all too aware of their dark secrets. Unlike most other prom horror movies this one takes place in a limo pretty much-echoing elements of "Saw" and "Would You Rather" to spin an inconsistent film that starts off as a bad imitation of High School Musical before getting to the meat of the story. It is then that we get an unscary collection of arguments as the secrets turn these friends on one another. The concept was promising, but maybe a conventional storyline would have helped this film. 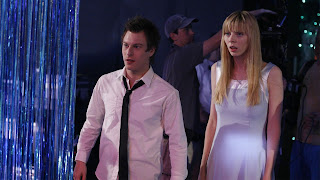 This sequel to the 2002 body horror film picks up soon after the events of the first film with a group of high schoolers falling victim to the bacteria-tainted water that is served during the prom. As the prom attendees begin to puke, melt and go crazy the school is put on lockdown by armed soldiers who are using deadly force to contain the outbreak. As with the first Cabin Fever, we get an insane amount of blood, guts and full-blown body horror. We also see a poor script, terrible acting and extremely gory deaths sequences that will make many turn off the movie. 6. Texas Chainsaw Massacre: The Next Generation (1994)

The plot is not too original; it pretty much follows the original in most details except instead of a bunch of hippies you have a group of prom-goers getting lost. They soon meet up with a weird tow truck driver with a mechanical leg who turns on the group. From there you have poor wallflower Renee Zellweger getting terrorized by the cannibal clan that includes Matthew McConaughey as the crazy tow truck driver, a weird cattle prod armed brother who spouts bizarre quotes and of course Leatherface who now is in full drag. I kid you not, the chainsaw villain of the first film is wearing a wig, dress, and makeup.

While pulling a prank, three popular mean girls accidentally kill their best friend and must find a way to keep it secret, even if it means taking in a shy wallflower and making her one of them. While trying to cover their tracks, they instead create another problem when the wallflower threatens the social order with her new found popularity as prom approaches. This black comedy follows a group of girls similar to ones found in Heathers, they are beautiful, fashionable and pretty much run the school through fear and intimidation even within their circle. When it was released in 1999 Jawbreaker received terrible reviews yet in recent years has become a cult classic for its excellent cast, slick dialogue and mean girl tropes that would inspire later teen films. 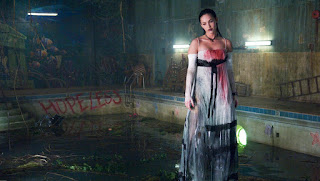 Needy and Jennifer have been friends most of their life and remain close despite being in different social circles. One night the two go to a seedy bar to listen to a band with Jennifer leaving the bar with them afterward. When she returns after suffering a physical assault, she becomes a possessed killer who turns on men leaving Needy wondering what happened to her friend. Stopping her becomes Needy's goal even if it means hurting her best friend. This supernatural black comedy seems like another silly teen horror film yet it is instead a film that explores the role friendship plays between two young women and how events can change their dynamic. Jennifers Body did not fare well at the box office but has become popular since its release on video becoming a cult classic. Megan Fox and Amanda Seyfried work well together, and that helps to carry a film that otherwise would be passed off as a horror-themed chick flick. 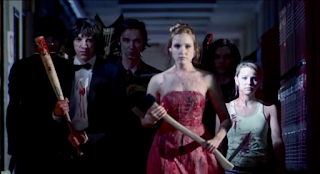 Prom night is in the air but not for the sci-fi geeks, burnouts and other outsiders who are avoiding the big dance. When toxic chemicals turn many in the school and town into zombies, it is these same losers that take charge to fight off the army of the dead and win over some of the pretty ladies. This independent horror film is no different from the many other zombie films but like Return of the Living Dead adds humor, crazy action and plenty of creative ways to handle zombies. The cast is mostly unknown yet seemingly age-appropriate, so their roles are convincing, and it is no problem cheering for them. Instead of reinventing the genre Dance of the Dead takes the best that classic zombie movies offer and delivers a surprisingly fun and entertaining film that is a real treat to those who enjoy zombie comedies. 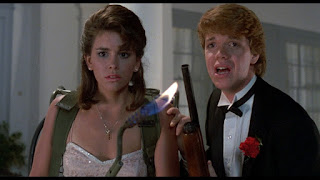 An alien parasite lands on Earth and infects people by turning them into killer zombies; the first outbreak was contained through the actions of a rookie cop only to find that the corpse he hid 27 years before has been found and releases its parasite on a new set of victims. Now a group of college buddies faceoff against these creatures as the big dance approaches threatening the students and faculty. Night of the Creeps is an excellent throwback to the B-Movies of the 1950's. Skillfully mixing sci-fi, horror, and comedy with plenty of creature effects, Night of the Creeps became an instant cult classic that despite its poor box office remains one of the best creature features of the 80's. Director Fred Dekker would also direct the classic Monster Squad.

Robin McLeavy stars in this twisted tale of revenge that shows just how far a girl and her father will go to make her special night one that her date will never forget. The Loved Ones is an Australian horror film that mixes a little bit of Misery with Prom Night in this 2009 import. The movie is quite graphic and does qualify as torture porn yet the director does an effective job hiding the most brutal of events while still giving the viewer enough to make you cringe. Despite the violence, the film does offer some humor with the interaction of Lola and her father, they are well cast and play off each other in a most sadistic yet endearing way.