I will be posting Christmas themed horror films over the next 24 days, for the first night I am listing the 2006 remake of the classic slasher film Black Christmas. 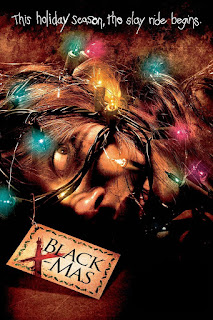 A partial remake of the 1974 slasher classic, Black Christmas follows a group of sorority girls who are stalked by a killer who is hiding in the attic of their house after escaping from a mental institution. The young women are planning on going home for Christmas holiday but are caught in a winter storm, and tensions rise after sordid secrets are revealed. The arrival of a family member looking for her missing sister set in motion a bloody night of terror as the killer known as Billy makes his presence known. In an attempt to differentiate from the first film director Glen Morgan uses flashbacks to give the killer more backstory and show the motivation for his evil deeds. The cast is made up of familiar faces including Katie Cassidy, Michelle Trachtenberg, Mary Elizabeth Winstead, Lacey Chabert, Oliver Hudson and Andrea Martin who appeared in the original film. The film is nowhere near the classic that the first film is as the scores of horror films that copied the original have pretty much dried up the creativity well. The one aspect that Black Christmas does excel at is the casting of attractive actresses who despite their stereotypical roles seem more genuine with their use of bad language, alcohol use, and family issues.
Posted by The Losman at 11:12 PM