I will be posting Christmas themed horror films over the next 24 days, for the second night I am listing the 1982 slasher The Dorm That Dripped Blood. 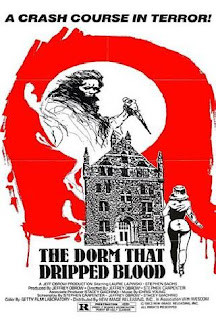 A group of five students in a university volunteer to stay behind to clear out a building set to be demolished after the Christmas holiday. While they are at work, they encounter a vagrant who is going through the trash and maybe taking items from the building. This event puts the staff on notice after members of their group disappear and are found brutally murdered. Released during the height of the slasher boom, The Dorm That Dripped Blood was filmed initially with the name The Third Night but was changed to Death Dorm after production was completed. Filming was done around the campus of UCLA during a holiday break with equipment on loan from the university. The film suffers from characters that are too generic and an overreliance on red herrings that make the movie even more derivative. On the upside, the movies gore effects are done effectively yet had to be edited due to threats of an X rating and its inclusion in the UK's infamous Video Nasty list. This movie was the first film for Daphne Zuniga who would find success in some popular films and television shows in later years.
Posted by The Losman at 5:26 PM