I will be posting Christmas themed horror films over the next 24 days, for the twentieth night I am listing the 2016 psychological horror thriller Better Watch Out. 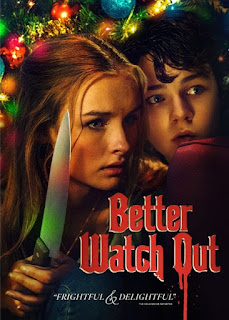 Babysitters are a common target in many horror films, Halloween and When a Stranger Calls are two well-known horror classics that have young babysitters trying to survive a threatening figure who is stalking them while they watch over someone's children. Chris Peckover's Better Watch Out is a 2016 psychological horror film that has a babysitter facing a home invasion while she is looking after her charge. Ashley is an attractive high school student who is called by the Lerner family to look after 12-year-old son Luke. Like most boys, his age Luke is attracted to Ashley and hopes the night will give him the chance to win her heart. His attempt to seduce her is stopped by one of his friends crashing the evening, yet he is not the only unexpected visitor as someone targets the home and threatens everyone inside. Ashley takes charge to defend Luke but she will soon learn this is not the usual home invasion situation. What looks like a cookie cutter babysitter in peril film is revealed to be something quite different. Better Watch Out is an intense and twisted take on the babysitter in peril trope we have all become familiar with. Borrowing elements of Home Alone, the film includes some shocking twists that will have you wondering what the hell is going on. The film works well because the young actors Olivia DeJonge and Levi Miller portray their roles quite effectively. To reveal any more would be to spoil what is one of the most innovative storylines since A Cabin in the Woods. Better Watch Out has won praise from critics and fans of home invasion movies for the great plot and has become a popular Christmas horror film in recent years.
Posted by The Losman at 11:37 PM