Ruin Me
Dir- Preston DeFrancis
This escape room summer camp-themed slasher plays like a copycat 80's horror movie, but the twists in the story concerning the final girl will have you guessing if what we are seeing is real or just her mind playing games with her.

The Devils Doorway
Dir- Aislinn Clarke
A found footage film that uses the real-life horror of the Magdelene Laundries as the backdrop for a story involving a supposed miracle and the terror that awaits a pair of priests who are sent in to investigate.

Summer of '84
Dir- Francois Simard, Anouk Whissell & Yoann-Karl Whissell
A group of young boys spying on their neighbor has them suspecting that he may be involved in some crimes occurring in their town, it makes it more difficult as he is a police officer in their community.

The Apostle
Dir- Gareth Evans
A man travels to a remote island community to look for his sister who he suspects has been kidnapped by a cult. What he finds there will be far more shocking and next to impossible to escape.

Anna and the Apocalypse
Dir- John McPhail
As the world falls apart around them in the midst of a zombie apocalypse, a group of teens fights and sings in the hopes of finding their loved ones as they learn to depend on one another to survive. 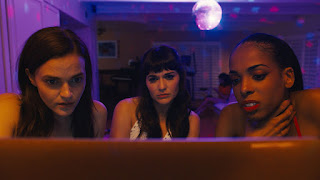 Cam
Dir- Daniel Goldhaber
The life of an online camera girl is turned upside down when her account is stolen by a mysterious doppelganger that mimics her behavior but goes much farther than she been willing to before.

Mandy
Dir- Panos Cosmatos
A tale of one man's revenge that plays out in music and drug-fueled visual spectacles that seems hypnotic and surreal. Truly the most epic of all of Nicolas Cage's films.

Halloween
Dir- David Gordon Green
Forty years after she survived a deadly encounter with a masked assailant, Laurie Strode has prepared for a confrontation with Michael Myers after he escapes captivity during a transfer. 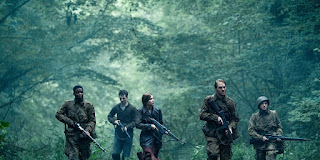 Overlord
Dir- Julius Avery
A team of paratroopers sent in to disable a vital communications link on D-Day is shocked to find a Nazi laboratory playing host all sorts of unspeakable experiments and atrocities.

Suspira
Dir- Luca Guadagnino
The dark secrets of an elite dance academy are revealed through the actions of the school's director, a new arrival and a psychotherapist. What happens next will depend on their willingness to wake up or fall prey to the madness.
Posted by The Losman at 12:49 AM