I will be posting Christmas themed horror films over the next 24 days, for the 3rd night, I am listing the 2015 slasher movie All Through the House. 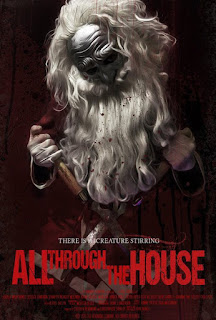 College student Rachel Kimmel comes home for Christmas break and offers to help a reclusive older neighbor Mrs. Garrett with her decorations. She then recalls the young girl who lived there that she tried to befriend until she disappeared one night. As she decorates the home with the help of some friends the neighborhood is terrorized by a lunatic dressed as Santa who kills Rachel's neighbors and friends yet her greater fear may be what she finds inside Mrs. Garrett's home. All Through the House is an independent Christmas themed slasher starring Ashley Mary Nunes and directed by Todd Nunes. While the film follows the usual trope of horror slashers what helps it stand out is the use of practical gore effects that will make this film a treat for fans of 80s style slasher films. The cast is decent given the low budget, but special praise goes to the design of the evil Santa costume and the vast amount of Christmas lights used in the film to help make the movie look festive despite being filmed in California. Even with a plot that borrows from such classic horror movies like The Burning, Sleepaway Camp and Friday, the 13th, All Through the House is a notable effort and should be watched as an homage to the excellent holiday slasher films of the '80s.
Posted by The Losman at 10:47 PM